On the eastern edge of the Atherton Tablelands, the Barron River drops over the edge of the plateau, forming the Barron Falls on its way down to the coastal plain of Cairns. Kuranda village borders on both the Kuranda National Park and Barron Gorge National Park. Nestled within World Heritage List protected wet tropical rainforest, it is home to abundant wildlife and beautiful scenery that has attracted visitors for more than a century.

Kuranda is well-known for its tourist markets which feature high quality local arts and crafts, gourmet food and local snacks, informative wildlife and ecology displays, aboriginal dances, mini-golf, bungee jumping and more. The markets are open 7 days 9:30am until 3:00pm. Everything in the village, including the markets are accessible on foot and within easy distance of the train station and Skyrail.

Kuranda can be accessed by road via the scenic Kuranda Range Road, by rail via the spectacular Kuranda Scenic Railway, or by cable car on the Skyrail Gondola. More transport and tour options.

There are rainforest walks around the village where many species of animals and bird can be seen. You can walk to Barron Falls and Wright's lookout. There are also river cruises on the Barron River.

Kuranda hosts a wide range of activities that can suit any budget from backpacking to luxury resorts. The visitor center in Centenary Park provides free brochures, maps, and informed local advisors who can help visitors, including those with special needs.

The attractions of Kuranda include one of the largest butterfly aviaries in the world, the Australian Venom Zoo - home of some of Australia’s deadliest snakes, spiders and scorpions, and Birdworld. In 2015, Kuranda Koala Gardens opened, giving visitors the opportunity to 'cuddle a koala' as well as viewing other native Australian animals such as wombats, freshwater crocodiles and Kangaroos.

The Cairns to Kuranda Railway

The Cairns to Kuranda railway is 75 kilometers long and includes 15 tunnels, 93 curves, and many bridges spanning deep ravines and waterfalls. The views over Cairns, and the Coral Sea are breathtaking and the train stops briefly at the Barron Falls where passengers can disembark and enjoy the view.

The Kuranda Scenic Railway departs twice daily from Cairns at 8.30am and 9.30am for an approximately 2 hour journey to Kuranda with stops at Freshwater and Barron Falls. The return journey departs Kuranda at 2.00pm and 3.30pm.

History of the Cairns to Kuranda Railway

Construction of the railway began in 1886 and it was officially opened in 1891 to serve the inland mining communities around Herberton, and to help to develop the timber and pastoral industries on the Atherton Tablelands.

Construction was a formidable task due to the difficult terrain and tropical conditions. Many workers were lost to tropical diseases and work accidents. Most of the work, including tunneling was carried out with hand tools and explosives. There were up to 1500 men employed on the project at one time, mostly new immigrants of Irish and Italian origin. 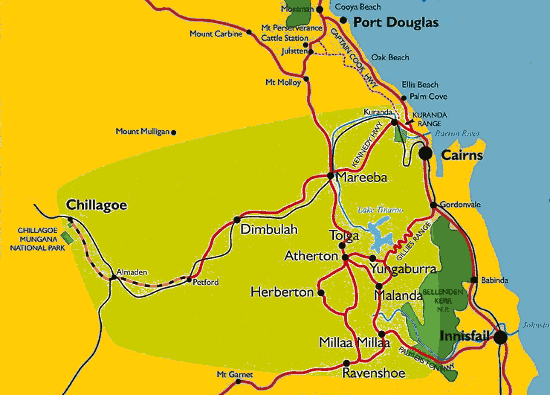